Great work by staff and students preparing 260 breakfast care packages for our student and their families. Don’t forget to collect yours from the Academy every fortnight on a Wednesday from 12 Noon– next collection date Wednesday 17th June! Thank you to @sfmtweet @AbelandCole https://t.co/qh45nxROdp

Live Q&A with Student Ambassadors from @StAnnesCollege, Oxford University this week on Microsoft Teams – great questions from our students to find out what university life is actually like! Thanks to Hannah and the ambassadors for joining us @OxOutreach @UniofOxford #oxplore https://t.co/MbfuqR2n6O

Our whole school community is deeply hurt by racial injustice, not only in the US but in the UK and elsewhere. We are immensely proud of our school's diverse demographic. In solidarity with #BlackOutTuesday, here are some resources you might find helpful https://t.co/lN7QY6wkyr

HAPpy half term to our wonderful #HAPfamily! We miss you lots and can't wait to see you all soon. Wishing everyone a safe and relaxing half term and remember to spread a little #HAPpiness to those around you 💙 #KindnessMatters https://t.co/EFg0pplEjh

We've missed all our students so much 'Since You've Been Gone', so we made you a video 💙🎤🎶 to let you know how much we care 😊 We are definitely spreading some #HAPpiness with this 😂. ENJOY! #MentalHealthAwarenessWeek #HAPfamily #SeeYouSoon #missyou https://t.co/Hb0Eq8hnuu

Thank you for all the kind messages from students and staff yesterday to celebrate our wonderful teachers. Your support and thanks mean everything 😊. Continue to spread a little #HAPpiness and let someone know you care 💙 #KindnessMatters #MentalHealthAwarenessWeek https://t.co/yf89CfV4im

A repost of this fantastic video for our #30minutemovement challenge. Yoga is such a fantastic form of exercise for both the body and mind #MentalHealthAwarenessWeek https://t.co/lZu5OHP2Wg

Here is Ms Enderby's motivational #30minutemovement idea. Why not try some ballet too?! #HAPpiness #MentalHealthAwarnessWeek https://t.co/2mM8J6Pn6v

Our Y9 German class are studying friendship and relationships. They have written descriptions of their friends & recorded themselves talking about them. It's so important to tell people in your life how important they are & what makes them special. Spread some #HAPpiness 💙 https://t.co/trjWjR1i3S

Students have been sending in pictures of the food to they have been cooking at home to Ms Snow. Spread some #HAPpiness and try out these ideas! Have you been cooking? Send us your pictures! Ms Snow is making a HAP Cookbook! #KindnessMatters #MentalHealthAwarenessWeek https://t.co/FA0VsmoELV

Some students have been spreading some #HAPpiness by cooking for their family at home. Here are some ideas for you! Have you been cooking? Send us your recipes! #KindnessMatters #MentalHealthAwarenessWeek https://t.co/FbYbGS2KWf

Third and final #MentalHealthAwarenessWeek Challenge. What will you write about? Spread a little #HAPpiness 😊 https://t.co/LodvXjO7FO On Thursday 11th July our three Jack Petchey Award winners received their awards in the Southwark ceremony in Westminster. It was such a pleasure to see these wonderful students, along with those from the other schools, receive their awards. Their parents/family members who came were bursting with pride!

Moustapha is a member of the Academy Orchestra, Jazz Band and Chamber Choir. His commitment to his musical studies is outstanding! He recently supported with the Peckham Songfest, where he visited 6 local Primary schools to teach the students the songs and improve their singing. He was excellent with the primary students and indeed, this extends to the support that he shows all students in helping them to improve and progress. He is genuinely one of the most naturally talent musicians I have met and is integral to the success of music making in Peckham!

Evida is a highly motivated individual who was instrumental in organising the year 11 prom. She formed the prom committee, delegated roles to other students, and motivated her peers to reach their goal. She did this alongside preparing for her GCSE examinations.

Luna is an outstanding young footballer. She has been an inspirational member of our Football Beyond Borders group and has helped to lead and guide other members of the group in a positive way. They have just finished interviewing famous inspirational role models and have published a magazine called, “The Women who Changed the Game.” She is a very talented footballer and plays to a high level in and outside of the Academy. Luna has had a real impact in terms of breaking down stereotypes towards females in sport. 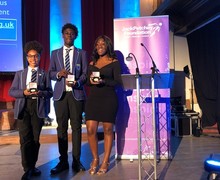 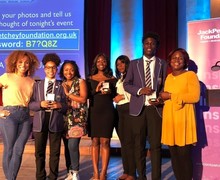