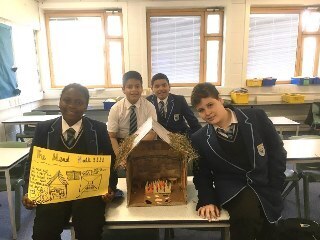 Since January, a group of Year 7 students have been meeting weekly at History Society to bring the past to life and improve their understanding of Engish history through model-making and archaeological experimentation.

Starting with the Roman period, students crafted an elite Roman villa complete with murals, mosaics and hypocaust central heating. In stark comparison to this luxurious Roman technology, they next recreated an Anglo-Saxon mead hall (pictured). The juxtaposition between these two models clearly illustrated the steep decline in material conditions following the fall of the Western Roman Empire.

For their current project, the students are acting the part of monastic medieval scribes. Having been given a commission from none other than King Edward I, the scribes are in the process of recreating a page of the Bible. They will have to prepare their oak gall ink from scratch and make quills, before setting these to parchment in their best Gothic script.

Though still in its infancy, History Society has proved a hit with its dedicated membership. "Building things helps me learn how people lived in the past," says John, Year 7. 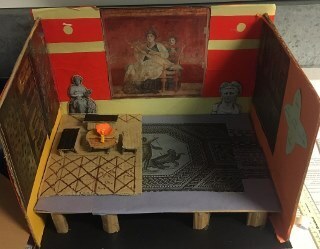 Inside the Roman villa made by History Club.