On Wednesday 15th October, four of our best Mathematicians from Year 8 and Year 9 went to Harris Academy Greenwich for a Maths competition to celebrate World Maths Day.

14 different Harris Academies came to compete for the crown of best at Maths. The first few rounds Peckham were noticeable working well together as a team. Other staff commented on how well they were doing as they walked around the hall assessing the competition. Our brightest moment came in a key word spelling bee round. Pupils had to stand up and decide if they would spell the key word forward for one point, or backwards for two points. It was Giovanni who stood up and was the first brave competitor to say he would read his mystery word backward. His word was congruent and he spelt it backwards without hesitation bringing audible gasps from all in attendance.  Following this round we had an unfortunate buzzer round, and missed out on the top three. Despite this all of Jenny Hoang, Henry Hoang, Kieu Nhi Vu and Giovanni Gesugrunde conducted themselves superbly, being gracious in both victory and defeat, and were an absolute credit to the Academy. 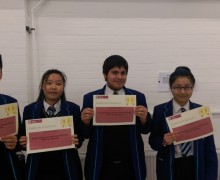