Wonderful detailed revision by Year 8 students ahead of their assessment next week, using dual coding, knowledge organisers & teaching each other! @Harris_History #Peckham https://t.co/Vu9Hg7QXrM

Well done to @CAUKINSTUDIO on your Feelings Library Installation! So excited to work with you and our students in the new year to design and building something exciting in our Quad area with the dismantled resources to support mental health in our Academy! https://t.co/1g8eDIHLjO

Our Winter Insight Magazine is now available to view on our website. Happy reading! https://t.co/lYsXFkQDAn #Peckham

What a fantastic way to start the day! 7.30am Basketball practice with Coach Clifford! 🏀 We are very excited to announce we have a full time basketball coach starting with us in January! Watch this space for the launch of our new Basketball Academy... #Basketball #sport #peckham https://t.co/dfwqwgox1S

Our Year 9 @MountviewLDN group blew everyone away with their performance of their thoughful and poignant piece. Stunning! You must catch this the next time it is performed 🔥 #Drama #Peckham https://t.co/lQ13Uy9NUE

A modern twist on Alice in Wonderland from our Year 8 Drama @MountviewLDN project group. Amazing work from everyone involved! #Drama #Peckham https://t.co/awGHzLeTmK

Our wonderful Year 7 Drama Group performing after working with the amazing students from @MountviewLDN on a project to re-imagine Cinderella #Drama #Peckham https://t.co/KivULuj10W

Our Year 8 Orchestra Day - learning about how to be a professional orchestral player and then becoming one at the end of the day. A true #LEAP ethos experience! #Peckham #music #Orchestra @MULTISTORYORGUK @misst_music 🎵 https://t.co/UpNWJtOJxp

Fantastic effort from our Year 8 students during Orchestra Day. They learned about the Orchestra, had Masterclass performances, sectional rehearsals and then finished with a performance of Bille Jean at the end of the day! @MULTISTORYORGUK @misst_music #Orchestra #Peckham 🎵 https://t.co/tBmhGHUTWk

One hundred and thirty Year 9 students took part in the event to mark Black History Month, hearing Femi talk about his own Peckham roots and their influence on the book, which is soon to be adapted into a major movie starring Daniel Kaluya. 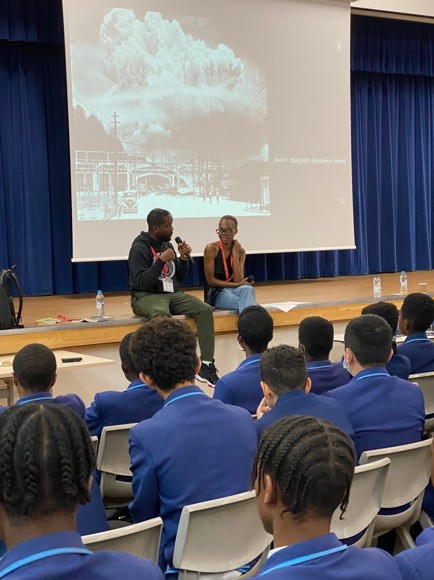 The event forms part of Penguin’s Lit in Colour campaign with The Runnymede Trust, which aims to support schools to diversify the teaching of English literature. Research published by the campaign earlier in the year found that fewer than 1% of students at GCSE in England study a book by a writer of colour.

To engage young people in the campaign, Lit in Colour has set up a dedicated TikTok account posting content which helps young people discover books by writers of colour from a range of different publishers, hosted by popular ‘BookTok’ influencers Coco and Carla.

The Upper World event was live streamed on the TikTok channel to enable more young people to tune in across the country. Video content from the event will also be published on the publisher’s young adult channels including Penguin Platform’s YouTube channel.