The Artist Guide at Harris Academy Peckham gets a Visit from The Voice winner Jermain Jackman.

On Monday the 8th June students at Harris Academy Peckham got the fantastic opportunity to talk music and career plans with UK Soul and RnB singer Jermain Jackman. Winner of the BBC’s singing competition The Voice in 2014, Jermain from Hackney, North- East London gave the students an honest insight into the world of singing, behind the scenes gossip and some useful vocal techniques used by professionals in the industry. The Frank and humorous discussion lead the students through his personal Journey with Music as well as his career highs and lows. The young people then got to quiz him on his upcoming projects, what he plans to study at university and what advice he would give for singers who lack confidence. Jermian who plans to study Politics is a keen advocate for hard work and perseverance. No matter what your skill or talent he says, students should work hard and follow their dreams.

After several pictures and a few autographs a small cohort of keen singers got to entertain Jermain with their own singing skills Jermain gave each of them some targets for development as well as thanked them for their bravery in singing for him. Next in the true spirit of sharing he sang an impromptu song for those that had sung for him.

It was a great evening attended by over 40 keen performing arts students right from year 7 through to year 13 and all learnt a lot about what it takes to win a major singing competition.

Omotola Noble-year 7 said. “It was great to sing for someone like Jermain. He liked my song choice as I chose an old gospel song.”

Talliah Grant-Year 9- “I was so nervous I almost couldn’t sing, but I did it. It was great.”

Ellie Rose- year 8 –“I got his autograph and took a selfie with him.”

This is one of many great workshops organized by Ex-student and business entrepreneur Michael Grandison who runs L.N.D.A a dance platform for up and coming dancers and choreographers. This is one of a series of workshops that have allowed the students to gain an understanding of the performing arts employment sector and what it takes to be successful in one of Britain’s most profitable economic industries.

Next week we have Eastender’s star Danny Boy-Hachard who plays Lee carter and Fady- ElSayed who is a British/ Egyptian actor from Paddington and been in programmes like Law and Order UK, Silent Witness and Casualty. 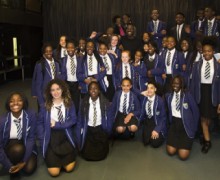 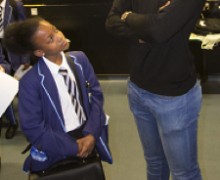 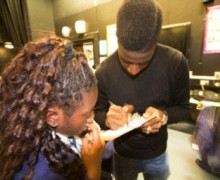 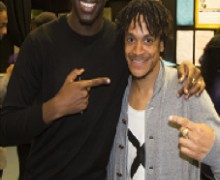